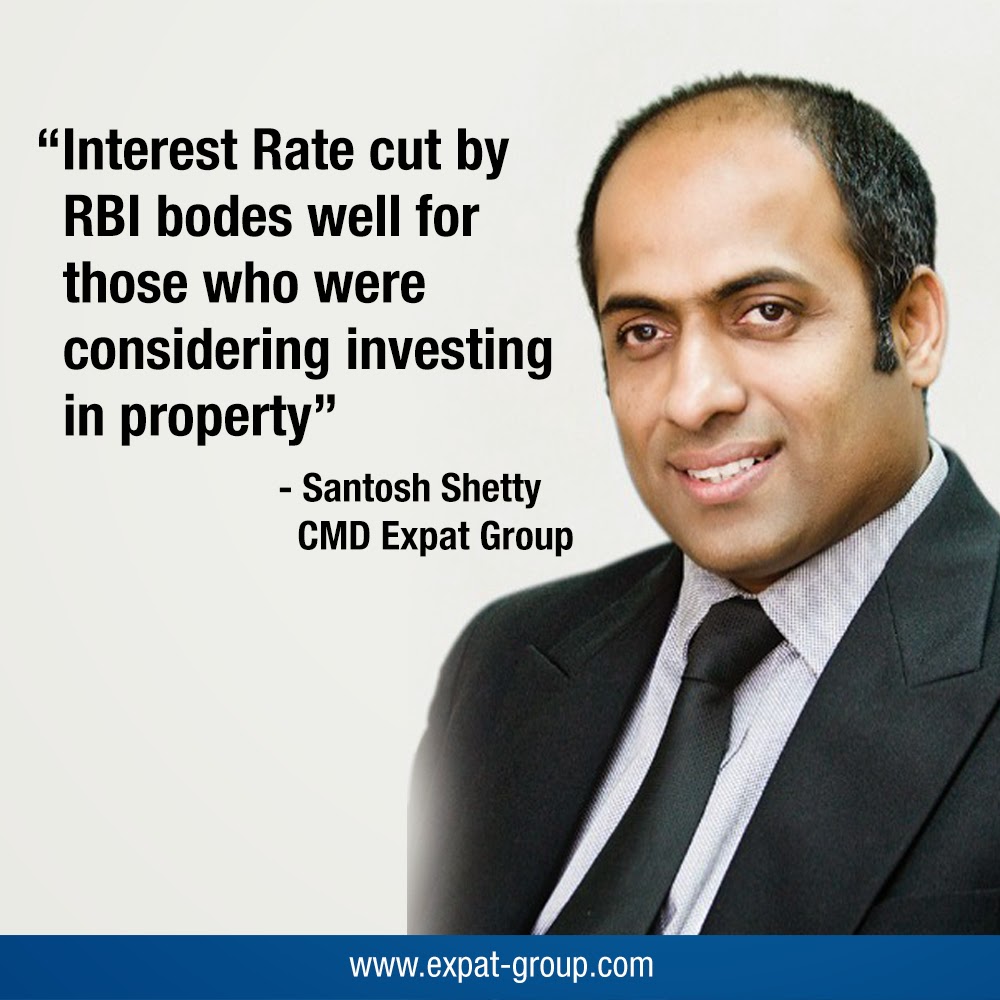 The Confederation of Real Estate Developers’ Associations of India (CREDAI) the apex body for private real estate developers in India expressed their happiness over the unexpected but long awaited move by RBI to reduce the repo rates by 25 bps ahead of the 6th Bimonthly policy rate review on February 2015.
Speaking on the development C Shekar Reddy President CREDAI - National says, “Considering the overall economic situation and challenges being faced by the industry, we welcome the reduction in repo rates, which will ease the burden on the buyers and developers. The decision of RBI to cut the interest rates was long overdue in the environment of lower inflation and poor domestic demand. The home buyers were upbeat but in a wait and watch mode due to high prevailing interest rates. We are hopeful that with this interim announcement of rate cut the banks will take the cue and pass on the benefits to the end user which will trigger the demand and offtake of housing. We are hopeful that keeping in view the low inflation RBI will continue the change of stance in the monetary policy and address the industry concerns for growth and give the necessary impetus.”
He further adds, “Housing has long been identified as a social priority next only to food and clothing. According to Housing and Urban Poverty Alleviation (HUPA) estimates present housing shortage is 18.7 million units with almost 96% shortage in the shelter for Economically Weaker Section (EWS) & Lower Income Group (LIG). There is an expected total housing requirement of 60 million units by 2030 in India. To further the efforts to meet the future requirement for housing we expect the government to announce the waited interest subvention scheme to further boost the RE demand and come out with the draft policy for the development of Smart Cities and special incentives to involve the private sector in the mission housing for all by 2022.”
According to Shishir Baijal - Chairman & Managing Director at Knight Frank India, “The RBI’s decision to slash repo rate by 25 bps is indeed a positive move which shall largely benefit the debt burdened developers and stretched households alike. This decision will also boost stakeholder sentiments for capital commitments. While lower interest rate alone may not be a reason for celebration for the real estate sector, however, a definitive indication about its future direction is reason enough to put consumer sentiments at a higher pedestal and infuse a sense of optimism.”Sachin Sandhir, Global Managing Director – Emerging Business and MD – South Asia, RICS, adds, “The move by the Reserve Bank of India (RBI) to cut the repo rate by 25 basis points to 7.75 per cent from the earlier 8 per cent comes on expected lines. The primary reason for the repo rate cut is the consistent easing of the inflationary pressure, as indicated by the recently published government data. Confirming this, RBI Governor Raghuram Rajan in his statement said, “Since July 2014, inflationary pressures (measured by changes in the consumer price index) have been easing. The path of inflation, while below the expected trajectory, has been consistent with the assessment of the balance of risks in the Reserve Bank’s bi-monthly monetary policy statements.” With the rate revision, it is likely that there will be a surge in corporate lending. This would benefit the real estate and construction sector firms too. The wholesale price index rose by 0.11 per cent in December compared with zero change in November. Inflation based on the consumer price index also came in below expectation at 5 per cent according to the recently released data.”
Rajnish Bahl, Group Managing Director, Centrum Group, says, “Rate cut was expected but the timing was a pleasant surprise. It is the beginning of the reversal cycle and a further boost to sentiment. With inflation expectations reined in on falling commodity prices including crude, the reversal cycle augurs well for real estate, banks and capital goods.”
Mahesh Singhi, Founder & MD, Singhi Advisors Pvt Ltd adds, “Today's rate cut by the RBI is a positive surprise and a new year gift of happiness. It may not help much in lenders immediately reducing the lending rates but certainly helps in generating positive sentiments. It also suggest of a synergized working between MOF & RBI, reflecting positive outcome of recent meeting between RBI Governor and Finance minister. This is a small step in the right direction for the growth phase ahead, especially interest rate sensitive sectors like infrastructure, real estate, banking, capital goods and automobiles. Some of the companies in infrastructure and telecom will find it quite opportunistic, which are either already highly leveraged or whose future earnings are sensitive to the interest rates, with expected commitments towards licensing fees and it will certainly help in reviving the investment cycle which the government is trying to restore. Going forward, the low interest rates coupled with lowering in crude prices & controlled inflation will boost credit growth in the country, which will further help kick-start the economy.”
Santosh Shetty, Chairman and Managing Director, Expat Group, says, “The interest rate cut is a positive step by the RBI. The benefit of this move will take some time to filter down to the real estate sector, but it bodes well for those who were considering investing in property as they can expect to reach decision on it soon. Now is the time to narrow down their property investment options as there is a hint of further cuts in the future and all in all it promises an optimistic outlook for the rest of 2015."
SOURCE: Construction Business Today
http://bit.ly/1x84zMt
Posted by Unknown at 16:09