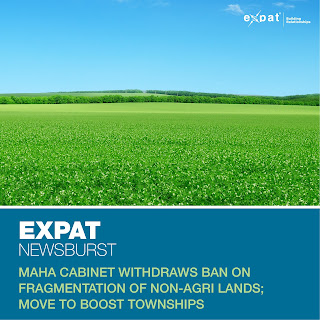 The state cabinet on Tuesday withdrew its ban on the fragmentation of non-agri cultural lands measuring 2,000 sq m (20 gunthas) or less into smaller plots. Such lands are mostly located in and around urban areas.

The cabinet's decision is expected to breathe new life into the real estate world: de mand and developments may rise manifold, substantially bringing down rates and the de mand of properties in prime lo calities of cities.

Lifting the ban means that issues of titles, mutations and non-agricultural conversions will be dealt with, to the relief of over 50 lakh people in various cities across the state, whose co lonies are labelled as `unautho rised layouts'. Such layouts are presently on the blacklist of pro perty buyers and do not attract civic developments such as roads and streetlights.

Indirectly , the move is ex pected to improve the state's `ea se of doing business' index and attract private townships of in dustrial and corporate giants as the state government will enco urage multipurpose develop ment of non-agriculture land in urban areas by granting them various permissions wit hout much red-tape.

Lakhs of people in the state have either bought such plots or constructed homes on land wit hout clear titling and appro vals. This has resulted in stalled property transactions in these areas, with no civic control on their development.

The decision will have far reaching impact on the real es tate market as people will prefer moving towards distant urban pockets than buying costly pro perties in the heart of a city . But for the changes to take effect the cabinet decision has to be promulgated into an act of law during the winter session of the assembly.