Managing From Abroad: How Power Of Attorney Helps NRIs Manage Their Assets 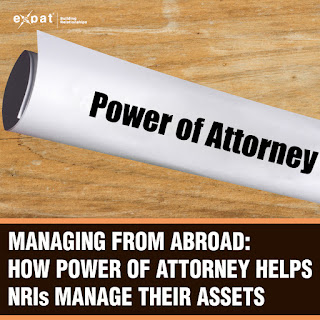 If you are living abroad and managing your assets in India has become a headache for you, Power of Attorney (PoA) is the perfect instrument for you. Because of its various benefits, even resident Indians tend to execute POAs. People having numerous assets find it tough to be present everywhere physically. Therefore, they execute POAs to delegate the responsibility.

What is a PoA?

For instance, if a person has purchased a property in India and cannot be physically present to process the registration, he can delegate these rights/duties to any relative/friend by means of a registered power of attorney.

Special PoA: In a special PoA, the power of the agent is restricted and limited to a specific purpose. A special POA may be transaction specific and the POA ceases on the completion of transaction.

Durable PoA: A durable POA remains effective for a lifetime, unless it is explicitly cancelled. A specific clause can be inserted in the document, stating that the representative’s power would remain valid even if the principal becomes incapacitated.

In real estate, PoA could be used for the purposes mentioned below:

In cases where a property has numerous owners, it would be difficult for all the people concerned to collectively complete a transaction. In such cases, granting the power of attorney to one person would make matters simple. As a result, this person would be empowered to act on behalf of all the owners collectively.

How Power of Attorney can be executed in India

If an NRI is present in India, he could before going abroad execute the POA from India itself.

Step 1: The NRI needs to get the desired matter of the POA drafted and typed on non-judicial stamp paper of adequate value which is generally Rs 100.

Step 2: Along with the legal representative and two witnesses, the person is now required to visit the Sub-Registrar’s Office.

Step 3: It should be ensured that all the persons going to the Sub-Registrar’s Office are carrying their valid identity proof. Photocopy of the POA, along with the original copy, must also be taken along.

Step 4: At the Sub-Registrar’s office signatures, photographs and fingerprints of the party will be collected.

Step 5: Now, you need to collect the registered POA on the due date from the Sub-Registrar’s Office. This might take three-five days after the formalities have been completed.

What if you are outside India?

Legalisation: In this case, signatures of the notary or judge before whom the POA is executed are required to be authenticated by the duly accredited representative of the Indian Embassy/Consulate. According to Section 3 of the Diplomatic and Consular Officers (Oaths and Fees) Act, 1948, notarising a deed from an authorised officer of the Indian Consulate/Embassy would be considered a valid notary. Such a POA is not required to be stamped at the time of execution. However, it needs to be stamped within three months from the date of receipt of the POA in India. Stamp duty would be payable according to Section 2(17) read with Schedule-I of the Indian Stamp Act, 1899, when the deed is presented for registration in India.

Apostalisation: The deed of POA executed outside India are proven through an apostallisation process which is governed by the Hague Convention, 1961. Also known as superlegalisation, apostille is a certificate which confirms and verifies the signature/seal of the person who authenticated the document. However, this deed, too, needs to comply with Indian laws such as the Indian Registration Act, 1908, and the Power of Attorney Act, 1882. You also have to pay the stamp duty on this. If one wants to obtain apostille in the US, he/she can refer to this link.

A PoA paper should be interpreted to include all the necessary powers for its execution. The POA has to be given a strict interpretation and no extra rights should be construed, unless they are specifically mentioned. For instance, if the POA mentions “right to lease”, the “right to sell” can’t be attributed to it.

The representative has to act within his scope and cannot bind the principal by his acts which are beyond his authority. As an NRI, you can’t be sued or held responsible for the fraud of the representative, unless it is proved that the fraud was done in connivance with you.

How to revoke a POA?

You may revoke a PoA during your lifetime.
PoA is also revoked when the principal dies or becomes insane or is declared insolvent.
PoA can be revoked on mutually agreed terms between the principal and the representative.
A PoA is revoked when the specific transaction for which it was executed has been accomplished.
Revocation of POA has to be done in the same manner in which it was executed. If the PoA was registered with the Sub-Registrar, you have to get it cancelled from the same office. Also, the representative and the parties concerned need to be duly informed about the cancellation of the POA. If interests of a reasonably large number of people are involved, it is recommended that a notice be published in a newspaper. A notice about the revocation of the POA could also be posted on the property where it can be visible to the general public.

Sale through PoA is illegal

There have been many cases where people resort to property sale through POA to avoid payment of stamp duty, which is illegal. Besides, selling properties where the owner has only right over possession and no right over ownership through PoA is also illegal. Proper transfer of title and ownership cannot take place, if the sale is done through a POA and not by means of a sale deed.