THE PROPOSED Pune international airport plan got a further push on Sunday with the Airports Authority of India (AAI) team visiting Pargaon Memane in Purandar taluka of the district yet again after the preliminary survey was conducted on September 3.
The team, comprising 15 officials, two directors from the Airports Authority of India, Maharashtra Airport Development Company (MADC) officials and district officials conducted an aerial and ground survey of the land to assure themselves of the technical feasibility of the area for the proposed airport site. 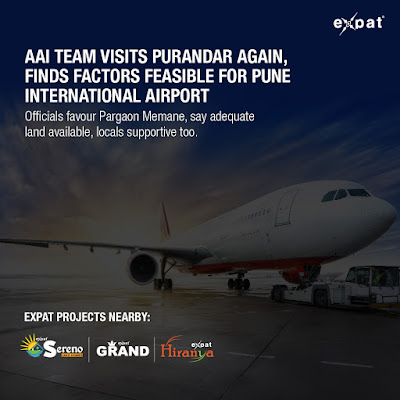 The airport plan for the city has been pending for the last 10 years because of a want of a suitable site, which can be acquired without opposition from the local villagers.
“We did two hours of flying and then followed it up with a road survey. We feel that the Pargaon Memane site in Purandar is feasible as there is enough availability of land. Moreover, the local residents too are willing to support this project in the area,” said MADC Deputy Chairman Vishwas Patil.
He said the next step after the review is the Ground Level Obstacle Survey, which will collect and validate necessary aeronautical, terrain and obstruction data. Runway ends, nearby obstructions and other critical points would also be monitored by the survey team if required, said Patil.
He said that the survey would cost up to Rs 15-20 lakh and would be done within eight to 10 days.
The team constituted AAI director JK Dutta and Principal Secretary, civil aviation, Sham Lal Goel and revenue officials. The team surveyed Pargaon Memane, Ekhatpur, Munjawadi and Khanwadi villages.
Pune District Collector Saurabh Rao said that the team did both aerial and ground survey of the area and found that the area meets all the parameters required technically for the runways. “The required land for the two runways is there at the site and the area seems feasible according to the team,” he said.
The team has come twice in a week’s time as there is a push from the Centre and state, especially from Chief Minister Devendra Fadnavis, officials said.
Paragaon Memane reduces the distance from the city to about 40 km, officials said. Water Resources Minister Vijay Shivtare, who belongs to Purandar, has been extremely proactive in having the project over in this taluka.
“This airport is absolutely essential as it will bring about better connectivity and will definitely reap benefits for the city, will be profitable and be a progressive step for the district,” said Patil. The team was expected to get back within two weeks but with the push from the Centre, they were back in a week’s time, he said.
In the last survey, the existing two sites in Khed taluka too was shown to the team following sites at Waghapur and Rajewadi in Purandar and on Sunday, more areas were shown in Purandar itself. “The local leaders are forthcoming and so are the local residents and everything seems positive as of now,” he added.
Chief Minister Devendra Fadnavis, who is also the chairman of the MADC, had tweeted about the survey on August 23 giving a boost to the pending proposal.