According to the original plan, the government had decided to acquire 1,390 acres for the core ‘Sea World’ as well as for the development of ancillary tourism facilities such as hotels, resorts and restaurants around it. 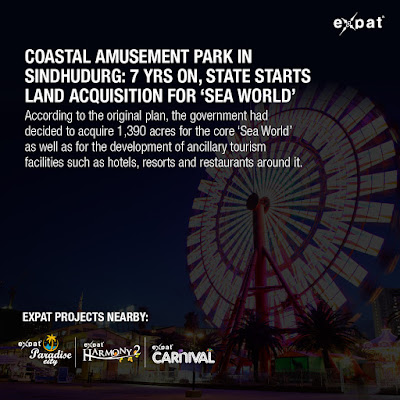 Seven years after it was first conceived, the BJP-led Maharashtra government has decided to give a push to the ambitious proposal of setting up a ‘Sea World’ or a coastal amusement park in Sindhudurg and started the land acquisition process.
The state government has decided to acquire 418 acres from landowners directly, instead of going through the district collector, to set up a tourist attraction on the lines of the US-based chain of water-themed amusement parks. The project was stalled for several years mainly due to resistance from local residents for land acquisition.
A senior official with the Maharashtra Tourism Development Corporation said, “We decided to deliberately acquire land through the private purchase route as the compensation can be as high as 3.75 times, so the landowners get a larger benefit. Also, it will expedite the entire process of land acquisition as a lot of procedural delays can be avoided.”
The ultra-mega project, expected to cost about Rs 6,300 crore, will come up in the villages of Tondavali and Vayangani in Sindhudurg district in the Konkan region, 471 kilometres away from Mumbai. The state government will implement the project on a public-private-partnership model. Officials estimated that the land acquisition would cost at least Rs 180 crore to Rs 200 crore and take at least a year to be completed.
The previous Congress-NCP government had first initiated the project in 2009, but faced stiff opposition from local villagers who did not wish to give up their lands. The two local gram sabhas had even passed resolutions against the project.
According to the original plan, the government had decided to acquire 1,390 acres for the core ‘Sea World’ as well as for the development of ancillary tourism facilities such as hotels, resorts and restaurants around it.
However, the Devendra Fadnavis-led government last year decided to scale it down to 350 acres, considering the local sentiments and dropped plans for land acquisition to create a tourism eco-system around the amusement park.


“We studied models all over the world and realised that such amusement parks can be comfortably built on land even smaller than 350 acres,” said a senior official with the state tourism department.
Accordingly, the government plans to acquire 350 acres for the sea world, another 50 acres to set up a skill development institute and the rest for beautification and a marina.
The official added that the government had started preliminary discussions with landowners, and except for at least 15 percent, the rest were on board.