Why 2017 is the best year to buy affordable houses?

Over 1.66 crore applications for various credit linked subsidies for housing loans have been received through various channels by the government in the past few months. In a country where online internet penetration is a mere 37% overall and 62% urban, this data available with the Ministry of Housing and Urban Poverty Alleviation shows that digital access is not an issue. It may require some facilitation. However, that too, provides job opportunities and therefore, is a good economic activity to pursue. 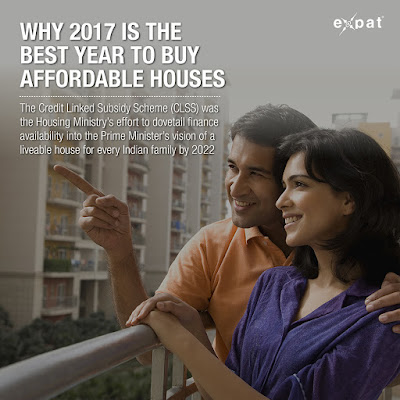 The Credit Linked Subsidy Scheme (CLSS) was the Housing Ministry’s effort to dovetail finance availability into the Prime Minister’s vision of a liveable house for every Indian family by 2022. The interesting thing is that while earlier it was housing shortages that were being computed, today the extent of subsidy sanctions are being touted.

So how does every citizen avail the sanctions? The CLSS announced in a previous budget offered a 6.5% interest subsidy to be credited into the borrower’s account for the first Rs 6 lakh of loan availed for buying a house of 30 and 60 sq m carpet area, under the Pradhan Mantri Awas Yojana (PMAY). The family income of the buyer was to be within Rs 6 lakh. This amounts to a net subsidy of 21% for the applicant. For the first time the government efforts had been stretched to include the Lower Income Group (LIG) segment and not the social sector of the Economically Weaker Sections (EWS) alone.

This meant that if a young urbanite with a family income of Rs 18 lakh approached a bank for a loan, he or she would be eligible to seek loan for a house of upto about Rs 65 lakh. This accounts for over 55% of the stock that is actively traded and listed on property portals like Magicbricks.com. On this loan the borrower is eligible for a subsidy of 3% on the first Rs 18 lakh, if the loan has been availed after January 1, 2017. This effectively brings the rate of interest down from the existing 8.5%. “This makes it the best time to buy an affordable house in urban India,” said Amrit Abhijat, Mission Director, PMAY and JS (HFA).

While nay-sayers have been predicting the digital challenge, statistics show that over 30 lakh people, without any aid, have been able to come and apply on the HUPA website. When some states were found not to be pushing for more CLSS applications, the Common Service Centres, manned by IT literates was launched. They charge a facilitation fee of Rs 25 per application but 28 lakh people have applied, paying this charge. The National Housing Bank (NHB) is now determining the eligibility of these applicants and estimates that at least 80-90 lakh loans will be disbursed.

For the first time, the Middle Income Group (MIG) housing has got incorporated into affordable categories. However, stressed Dr P Jaipal, Sr Executive Director, HUDCO, “The MIG subsidies are for one year. If we struggle on interpreting the law for a long time, then time will run away. The industry needs to be facilitated to transfer to MIG and take advantage of the scheme, or the next year when the scheme is appraised, the verdict will be that it is not a success.”

Another concern raised by Dr Jaipal was that since it is easier for the developers to make money out of the MIG sector, the higher end of the LIG segment that was being addressed by developers may be neglected. One way of ensuring developer interest is to keep a percentage of priority lending funds from banks for constructing LIG housing.

This plea was echoed by the State Bank of India representatives who asked for the definition of affordability to be dovetailed into the priority sector lending.
With or without priority sector lending, banks such as SBI and HDFC are holding major sessions on CLSS for its staff. This is part of the preparation for a large number of disbursals. NHB, on its part, is now equipped to make the disbursals into the bank accounts of the borrower in two days, thanks to a massive digitising exercise that has won them an award as well.

With the Digidhan and other digital cash movements in the past, many informal sector workers now have a digital footprint that gives them a CIBIL score. This is already being used by microfinance lenders such as the SEWA bank to lend between Rs 1-3 lakh. The ministry is already in talks with the Indian Banks Association (IBA) to sort out the concerns of lending to the unorganised sector. A simplified application form and document process has been circulated by the IBA. However, appealed the ministry, finally the banks have to take a compassionate view when lending to those in the informal sector as they may not have too many documents to support their application.

If you are buying a house in resale markets from someone who has got a house using subsidy and is selling now that the lock-in period is over, you are eligible to be considered for funding under the subsidy scheme. But seller does not get more subsidy.

The PMAY was launched in 4011 statutory towns as per Census 2011. Now all states are adding more statuatory towns, which now numbers 4300, to avail PMAY advantages. NHB, has now mapped all the localities in these cities to postal codes that will facilitate lending by the banks.

As the Secretary Dr Nandita Chatterjee stressed, “The entire purpose of PMAY is that those with no shelter should get a house and not to trigger speculation. So the schemes are all to facilitate purchase of the first house.”

With the inclusion of LIG and MIG in the fold of affordable housing, the government is clearly matching aspirations to resources to create a kind of ecosystem fuelled by incentives. They are available in 2017-18. The home loan interest rates too are low. Coupled with subsidies, they are the lowest in 20 years. But unlike in the Housing and Habitat policies of 1998 and 2007, when there was a lot of consumer facilitation and access to funds, this time round, the extent of the incentives is for a far shorter period.

Come 2018, all the incentives may not exist. Therefore, it is a good time to buy now if you don’t own a house.