Government to develop IT Park on Kadamba Plateau

After its failure to develop an IT habitat at Dona-Paula, the Government is setting up the IT Park on an area of over two lakh sq mts atop the Kadamba plateau. The land, which was in possession of Directorate of Heath Services, had been transferred to the IT department. 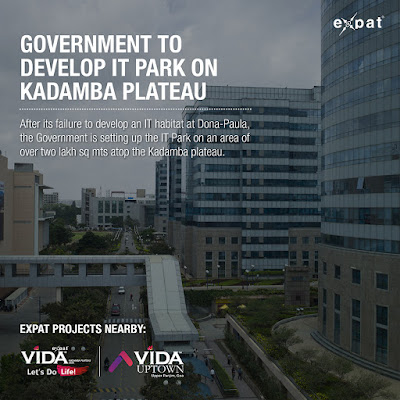 While the government is convinced and decided to develop the IT Park, the local Panchayat (Chimbel) members had rejected the proposal of setting up of IT Park on Kadamba plateau.
However, the opposition benches and the independents, who have been raising the issue of employment generation in the state assembly, have to now support the IT park. The vocal voices, including Vijai Sardesai and Rohan Khanute are in the BJP led coalition government in the state.
Sardesai has said that the IT sector is very important in the state and the young talents who are moving out of the state have to be accommodated with the state by inviting a best of the IT companies in Goa offering them a red carpet.
He mentioned the Common Minimum Programme should be to “give maximum employment to the Goan youth in IT sector and government will provide all support to the companies,” he added.
Speaking to Herald, BJP State President Vinay Tendulkar said “The government had to go through a lot of hurdles but the BJP government is firm on these projects as it will provide ample employment opportunities for the youth who otherwise go to other states for job opportunities.”
“The previous IT habitat at Dona Paula had failed to attract companies as there were many land problems and the land was of higher rates but now many of the companies have shown interest in setting up their units at both the IT Park in Chimbel and Tuem electronic cluster,” said Tendulkar.