Want to buy a house? 9 things you need to understand about GST

Magicbricks has compiled a list of new concepts that you need to know if you want to invest in real estate in particular and GST as a new concept in general
For every portion of the law, its interpretation plays a key role in its success and compliance. The Goods and Service Tax (GST) is no different. The key aspect of the new law is to be able to distinguish between what is happening today and what will happen in the future. 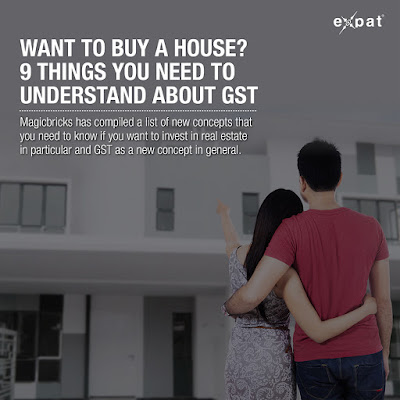 Magicbricks has compiled a list of new concepts that you need to know if you want to invest in real estate in particular and GST as a new concept in general. So when you land in the property market you know how the taxation machinery works.

As states and the Centre have different roles to play as far as taxation is concerned, there is dual GST which means, for whatever the goods and services that you buy the two governments are going to levy tax.
To begin with, every state will have its own state GST act (SGST) and state GST rules. For instance, Delhi will have Delhi GST Act while Haryana will have its own GST Act. Similarly, the Union government has enacted the central GST law (CGST). In case of an interstate transaction of goods and services, it becomes IGST or integrated goods and service tax. There is not much to talk about IGST except that the central component and the state component have been rolled into one tax called IGST.

Under the new tax regime, there are a number of taxes that will be discontinued. From a Union government's perspective, the central excise, the service tax, the two portions of the customs duty which is countervailing duty and special additional duty will disappear and merge into GST. From the state's kitty, VAT (value added tax), entry tax, octroi, purchase tax, entertainment tax, luxury tax and the various cesses and surcharges will all be subsumed into the new tax regime.

From the real estate point of view, stamp duty, which is a state levy, stays. Basic customs duty will continue to apply the way it is applied today. A cess that applies on customs at the rate of 3% also stays. GST would apply to under-construction properties at 18% (effective rate 12%). KPMG partner (indirect tax) Priyajit Ghosh adds, "While electricity usage has been kept out of the purview of GST, water charges will attract concessional GST."

The GST Act says that a person whose annual turnover is below Rs 20 lakh may or may not get registered under GST or pay GST. "If you buy goods from people who are unregistered then as a recipient you will have to pay GST on their behalf," says Ghosh. For instance, if a developer buys river sand from an unorganized player who is not registered and not charging GST, then the developer will have to pay tax on his behalf and then take a credit on the GST paid. This is a break from the past because hitherto if someone was transacting with an unregistered person, the liability to pay tax was on the supplier if he was below the threshold, but now the onus has shifted to the purchaser under the reverse charge mechanism.

The reverse charge mechanism means that if a person transacts with an unregistered dealer, he will have to pay the tax within 30 days under the reverse charge mechanism. "Under the previous regime, one had to pay service tax for using certain services such as rent a cab, legal services or transportation of goods by road. The same concept has been borrowed under GST, which means for a certain set of services you will have to pay GST and later claim credit on it," explains Ghosh.

The other aspect about GST is the input tax credit which is the heart of GST because there can't be a tax on tax. In the context of real estate, GST which is charged by contractors on construction of a house is going to be credited against the GST charge on sale. Under GST there is a composition scheme restricted to Rs 75 lakh turnover annually, i.e. between Rs 20-75 lakh. The composition scheme is a simplified scheme where one pays 1-2% on the entire invoice but one does not get ITC. This is a PAN-based turnover but not a state-specific turnover, which means, all states put together will not be able to go for a composition scheme and you are under a normal scheme. This means you will get a credit of all the input taxes that you have paid and you will have to charge the normal GST rate which is applicable, which is effective 12% in the case of real estate.

GST says that whatever additional credit a developer gets, the price has to be reduced by that amount. Likely to be enforced on the lines of the Competition Commission of India, the 'Anti Profiteering Authority of India' will take steps to check collusion between businessmen who may not pass on profits to the consumer. So, a developer is bound to pass on the profits to the consumer else he may have to face penal provisions under the law.

The place of supply rules will play a crucial role in determining the correct tax. If there is a transaction between two parties where either the services or goods are exchanged for a specific price then it gets into the definition of supply. As far as real estate is concerned, transactions are for under-construction properties. Fundamentally, if a sale is happening for an under-construction property it will attract GST. Therefore, a constructed property which has received completion certificate or occupation certificate or land will not attract GST. The interest and penalty on a delayed payment recovered from buyers comes under supplies.

Similarly, stock transfers also attract GST. For instance, if a developer has a project running in Noida and he wishes to transfer the excess cement in Noida to his another project in Gurgaon, he will have to pay GST on the stock transfer of cement. There is no GST if you do a stock transfer of same goods or any services within the state.
In a nutshell, the price of a property is not the final outcome of taxes alone. There are other factors including demand-supply dynamics and government policies, which play a critical role in determining the price of a property.