KOLKATA: Reliance Communications is said to have shortlisted nine companies, including Blackstone Group, Brookfield Asset Management, Godrej Properties, Hiranandani Group and Larsen & Toubro, from which it will select one to jointly develop and transform its 133-acre Dhirubhai Ambani Knowledge Complex (DAKC) campus near Mumbai. 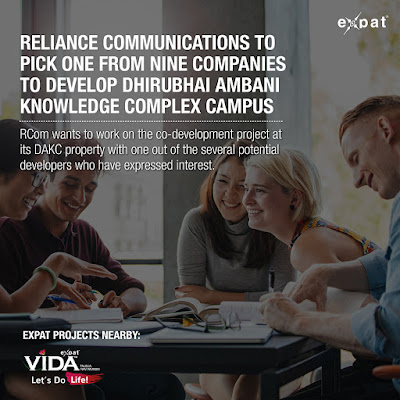 “RCom wants to work on the co-development project at its DAKC property with one out of the several potential developers who have expressed interest,” said a company spokesman.

The Anil Ambani-owned telco expects the new-look DAKC campus to start generating annual lease rental income of roughly Rs 1,500 crore after the next five years. After that stage, RCom expects to sell out and generate net proceeds upwards of Rs 12,000 crore, which will be used to cut debt to under Rs 10,000 crore, a person familiar with the matter said.