Will bitcoin buy you property in India anytime soon?

With Benami Property Act now brought to the centre stage once more, any service or commodity purchased in a form of currency which is not accepted as legal tender in India represents a risk to both buyer and seller. This, perhaps, is the strongest argument against bitcoin in Indian real estate transactions for now 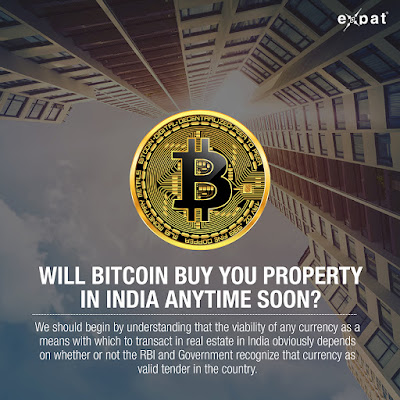 Bitcoin and other crypto-currencies have been in the news a lot if recent times, often for the wrong reasons but also because of the massive appreciation Bitcoin has been clocking up. To top it off, real estate has now been dragged into the bitcoin controversy, with a handful of projects in some parts of the US and Dubai actually inviting investments via the Bitcoin route. With the ongoing slump in sales, is it possible that developers in India will offer such an option to prospective buyers as well? Let us take a closer look at this.


We should begin by understanding that the viability of any currency as a means with which to transact in real estate in India obviously depends on whether or not the RBI and Government recognize that currency as valid tender in the country. So far, that is not the case with bitcoin. While the RBI was toying with the notion of launching an Indian crypto-currency, it apparently does not see much benefit in doing so. This is quite understandable.

The market needs transparency – not more opacity
The Indian real estate market is currently in the process of transiting from being an opaque and largely unregulated market to a more governed and transparent ne. This process has been kick-started by several policies and reformative regulations like the Real Estate (Regulation and Development) Authority or RERA Act, the unified Goods and Services Tax (GST) and the Benami Property Bill. As part of this process of increasing transparency and accountability for real estate and its related transactions, cash flows in and out of the sector need to trackable and accounted for at every level.


This is definitely not possible with money in the form of a currency whose origins and antecedents can, almost by definition, not be established in the majority of cases. The notion of crypto-currencies like bitcoin becoming legal tender for real estate transactions in India must first and foremost be considered in light of this fact.

No significant benefits, massive challenges
For the sake of an argument, let us assume that bitcoin transactions became acceptable in Indian real estate. Would this in any way affect the sector in a significant manner - for instance, would ROI on real estate be positively or negatively influenced? To arrive at an answer to this question, we must first consider that the value of real estate is determined by factors such as size, location, and most importantly local market rates – which, in India, are determined in rupees. This is how real estate is bought and sold in the country.

Hypothetically, If the RBI were to accept bitcoin as legal tender for real estate transactions at some point, it would be to the extent of allowing the rupee value of a property to be paid for in that currency. Remember, this would only happen if the RBI were able to establish the source of these funds to its complete satisfaction. Then consider that bitcoin has become such a popular mode of payment for crime-related transactions precisely because its sources cannot be traced if the person/s transacting in it do not want them to be traced.

Even if real estate deals transactions via bitcoin were to become legal in India, it would at best be extremely challenging - and there would be little or no real benefit to either seller or buyer. First of all, the Government levies statutory taxes on every real estate transaction and requires the payment of these dues to be clearly mentioned in Indian rupees for such transactions to be considered legal.

Likewise, market rates and property prices in India are calculated in rupees per square foot. From an ROI perspective, the currency used in transacting with it does not have any bearing on this value – and for a crypto-currency to become acceptable tender for buying a selling property in India, all these calculations would need to find a parallel monetary avatar that is acceptable to all stakeholders.

Difficult to swallow, harder to digest
Apart from the increased regulation in the real estate industry, the Indian banking and finance sector is extremely conservative and would find it very difficult to accept a currency which cannot be fully traced or regulated. Even if it did find a way to accept it, such a currency would also need to be comprehensible and acceptable to Indian end-users and investors. The currency would first need to be sanctified and accepted by various financial institutions - which is far from the case now. In fact, bitcoin has garnered itself a rather unsavoury reputation in financial circles which would make its adoption in India even more difficult.

Moreover, there is the question of safety of investment - a question which brings the Benami Property Act has now brought centre-stage once more. At the current time, any service or commodity purchased in a form of currency which is not accepted as legal tender in India represents a risk to both buyer and seller. Both end-users and investors want their real estate assets to be legal in every way so that ownership and resale do not become a problem for them. This, perhaps, is the strongest argument against bitcoin in Indian real estate transactions for now.


In short, crypto-currencies like bitcoin are very unlikely to take off in Indian real estate in the foreseeable future.