Private equity inflow in the real estate sector is estimated to touch USD 100 billion by 2026 and tier-1 and tier-2 cities will be its primary beneficiaries, property consultant JLL India said in a report. 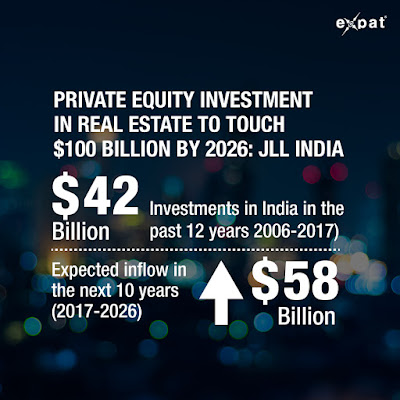 Private equity in the last few years has been concentrated in Mumbai, Bengaluru and Delhi-NCR, with Mumbai seeing the highest percentage at 31 percent of PE investment, followed by Delhi-NCR 27 percent and Bengaluru at 12 percent. Tier-2 cities and other markets have seen limited activity in terms of private equity funding, JLL said.

In the past 12 years (2006-2017) India has seen investments of USD 42 billion, while in the next 10 years (2017-2026) it is expected to see inflows to the tune of USD 58 billion. According to the report, the flood gates will open wider when REITs (real estate investment trusts) get listed.

In terms of asset classes, the largest investments went to residential sector, which has seen a total of 44 percent of all private equity investment in the sector so far. Although the percentage share has reduced in the last couple of quarters, the attraction of the residential sector remains strong as the exit route is clear for this asset class, JLL said. It added that IT and commercial account for around 27 percent of PE investment.

“India’s attractiveness as a global investment destination has been steadily rising. We have seen numerous measures that have created a positive economic environment, bringing in key factors like transparency, accountability and ease of entry into various sectors in India. This gives India a fillip in attracting capital. This would be the key factor for private equity to bet big on the sector in the future. We will see the flood gates open the time REITs are listed in the market. As this would give the developers a good option to exit or convert their holdings in to tradable stocks, through income generating assets. Further, with the current size of the economy and its steady growth with GDP pegged over 7% year – on – year for the next 3 to 5 years,” said Ramesh Nair, CEO & Country Head, JLL India.

Private equity inflows, over the last 3 years (2014 – 2017), in office and IT / ITES rose by 150 percent, with a strong attraction towards office sector. Although the residential sector remained the highest invested sector, the rise in the same period was a mere 5 percent of total investment flows in pure equity.

Debt structures dominate fund inflows in the residential sector, which is a key reason as to why developers are overleveraged. This is on account of the general sluggishness in residential markets and investors unwilling to take downside risk.

With increased transparency and regulations, we can expect a return of equity to residential markets in 2018. Another key insight is that except office and residential sectors, all other sectors together account for only 30 percent of total investments since 2014, according to the report.


“Investors are yet to explore the possibilities of new asset classes which will show strong trends in the near future. Alternate assets classes such as retail, industrial, warehousing and alternatives will be promising,” said Nair.