Getting ‘Real’ About Mumbai Real Estate 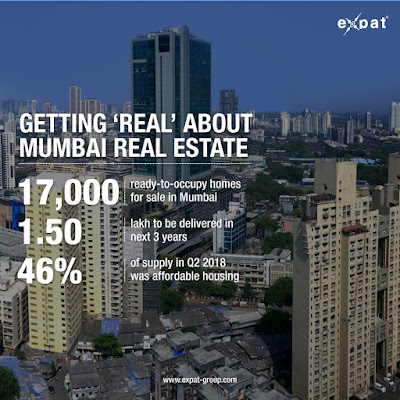 Real estate is close to the heart of most Indians who at some point want to buy or sell a property. The reasons could be emotional and investment-driven, and often both. And, of course, nothing defines Indian real estate quite like Mumbai does.

Call it by any name you want to - India’s financial capital, Maximum City, or the city of dreams and opportunity. One thing is sure - it is India’s most expensive housing market. Property prices here had increased by as much as 7-10 times over the past 20 years.

Today, the average number of monthly incomes required to own a home in the city is the highest among its other counterparts. Depending on where in Mumbai you want to buy a home, you are putting anything between 67-90 times your entire monthly income on the line.

While Indian real estate is rarely out of the news, probably no city's real estate market gets as much media attention as Mumbai's. That’s not surprising, considering that merely 5% of the people living in the city today can actually afford to buy a home here, either outright or with a home loan.

Mumbai sees roughly 50 new people coming to live and work in the city every hour. Approximately 2-3 lakh Indians arrive in the city every single year, looking for jobs or to make their entrepreneurial dreams come true.

However, the city itself is not growing in tandem. It is hemmed in by water on three sides and cannot accommodate the circular kind of development - the kind that spreads outward from a central focal point - that we have seen in most other Indian cities.

In Mumbai, development can literally take place in only two directions - from the south towards the northern suburbs, and upward.

The Problems with Going Vertical

While building super-tall skyscrapers is one way around this limitation, how many can one build before the whole system breaks down.

A fully-occupied 40-storeyed skyscraper with 1600 apartments roughly consumes 6.5 lakh liters of water and 4,800 kilowatts of electricity per day.

Each new apartment must now by law have a car parking space, and the building itself must have a minimum saturation of amenities that make life worth living in it.

Moreover, every skyscraper puts immense pressure on the existing traffic infrastructure - and creates yet another urban heat island that degrades Mumbai's already depleted environment even further.

The Bane and Boon of Speculators

The major factor responsible for sky-rocketing prices in Mumbai were the speculators - investors who bought homes with the sole objective of selling them in the short-term but earning the fattest-possible profit.

Speculators made Mumbai their Mecca because of the impossibly high property prices, and they drove the prices even higher.

Many are tempted to believe that it is the developers who are responsible, but they are responsible only to the extent that they avidly courted speculators because they could sell many flats off to them in bulk.

By the time everyone realized the long-term implications of speculative activities, the damage was done. Today, Mumbai is right up there with Tokyo, New York and London as a city where everybody wants to live and very few can afford to, except perhaps in the most constrained conditions.

One of the major developments seen in Mumbai real estate in recent times was the slight price correction - meaning that Mumbai's notoriously unrelenting and ever-increasing property prices first stopped growing and then began falling. Over the last 3-4 years, prices in the city have dropped anywhere between 3-5% across several areas.

In the last one-and-a-half years alone, property prices corrected by 2-3%. One of the major reasons for this was the new regulatory regime implemented by the central government including DeMo, RERA and GST. This correction in property prices was largely seen in the secondary market where investors were in a hurry to exit.

Meanwhile, developers became more focused on launching only those projects that were high in demand – affordable housing. As per ANAROCK data, out of the total units launched in MMR, a whopping 46% comprised of affordable units in Q2 2018.

How DeMo Changed the Status Quo

In one stroke, the Modi Government sucked the wind out of many sails - but in the case of the real estate business, it literally burned the sails, tore down the mast and almost sunk the ship. Demonetization decisively addressed the infamous 'cash component' in Indian real estate.

In the '60/40' formula, people would buy homes by paying as much as 40% of the selling price in cash, which was often unaccounted money. Black money was invariably hoarded in the form of the age-old 500 and 1000 rupee note versions, which DeMo in November 2016 rendered invalid and illegal.

At first, it was believed that only the secondary sales and luxury housing markets would suffer, primarily because these segments historically saw the highest incidence of cash components. However, the DeMo effect also percolated down into primary sales - or new homes being sold by developers.

Within a year, speculators had lost most of their previously voracious appetite for real estate – and with their exit, the worst stimulus for property price growth in a city like Mumbai also departed.

While it is true that cash is slowly creeping back into the real estate market, its pace is now severely curtailed by the new regulatory environment. Certainly, the blatancy with which cash was previously funneled into the sector is a thing of the past now.

The Impact of MahaRERA

Though RERA is still in progress, it is becoming increasingly clear that unethical and deceptive business practices – not only by developers but also brokers and, in fact,any agency that promotes real estate – will no longer be tolerated.

We are now looking at a future where everything must and will be on record, all promises must be fulfilled and heavy penalties – including imprisonment – await those who don’t toe the line.

Many other things have happened at the government policy level, but what matters the most is how they have affected end-users.

Real estate is well on its way to shedding its image as the bogeyman of Indian business, and the ghosts of disastrous home buying decisions will no longer haunt buyers for the rest of our lives. RERA is a process and not an event, but the process is underway and many of us are breathing a little easier now.

The biggest impact of RERA and other key policy changes has been on property sales - and while there was doubtlessly a dampening effect on the real estate industry, it is good news for end-users of real estate - even in Mumbai.

Within the turmoil that came in the wake of the various real estate-specific policy upheavals, the customer has finally become king. When sales plummeted to all-time lows, property sellers actually had to think about their customers’ interests for a change.

What the Data Reveals

· There are about 17,000 ready-to-occupy homes up for sale in Mumbai,and 1.50 lakh more homes under construction which will assuredly be completed thanks to the stringent MahaRERA.

· If we assume a standard flat size of around 900 sq.ft. of carpet area, the overall unsold inventory in the city right now accounts for around 2,300 full-sized football fields or 7,700 cricket stadiums.

Developers here have to pay hefty taxes on unsold inventory, and that most of them are so cash-strapped that they cannot launch any new projects until they have sold what they already have on hand.

To sell this inventory, they have literally pulled out all the stops. We have already seen property prices in Mumbai drop by 3-4% in the last 2-3 years.

Such a scenario would have been unimaginable in Mumbai 5-6 years ago.

Infrastructure
The latest Mumbai Development Plan 2034 has opened up areas which were previously barred from development, like the CRZ and salt-pan lands. Good in one way – there will be massive infusion of affordable housing. Not so good in other ways – it is bad news for the city’s environment, and it will put a massive strain on its current infrastructure.

However, we are also seeing a steady thinning-out of the urban population in Mumbai's central locations, with more and more people migrating to the new-emerging areas.

The trend of outward migration from the MMR will continue over the next couple of decades, not only because of the astronomic property prices and crumbling infrastructure, but also because these new regions are becoming the new employment hubs.

However, Mumbai's wealthiest inhabitants will definitely stay put in the city's ultra-expensive central areas. And as we can see all around us, the main city is working hard at improving the existing infrastructure.

These infrastructure projects are basically retention magnets for the limited but influential population segment whose economic lives are linked to the primary business activities in the city, and who can afford the real estate prices involved in owning homes in Mumbai’s most expensive locations.

Mumbai was originally reclaimed from the sea by joining seven islands to create a shipping and trading hub for the British. We must definitely take climate change and infrastructure to counter it very seriously because the city's sea level is rising by about 1.2 mm every year.

NASA has confirmed that over the next 100 years, glacial melt may increase Mumbai's sea levels by around 16 cm. It has been estimated that the Indian subcontinent could lose 14,000 sq. km of land if the sea level rises by one meter.

For this reason, Mumbai is at high risk from climate change. The time to start bulwarking against it with adequate infrastructure is now.